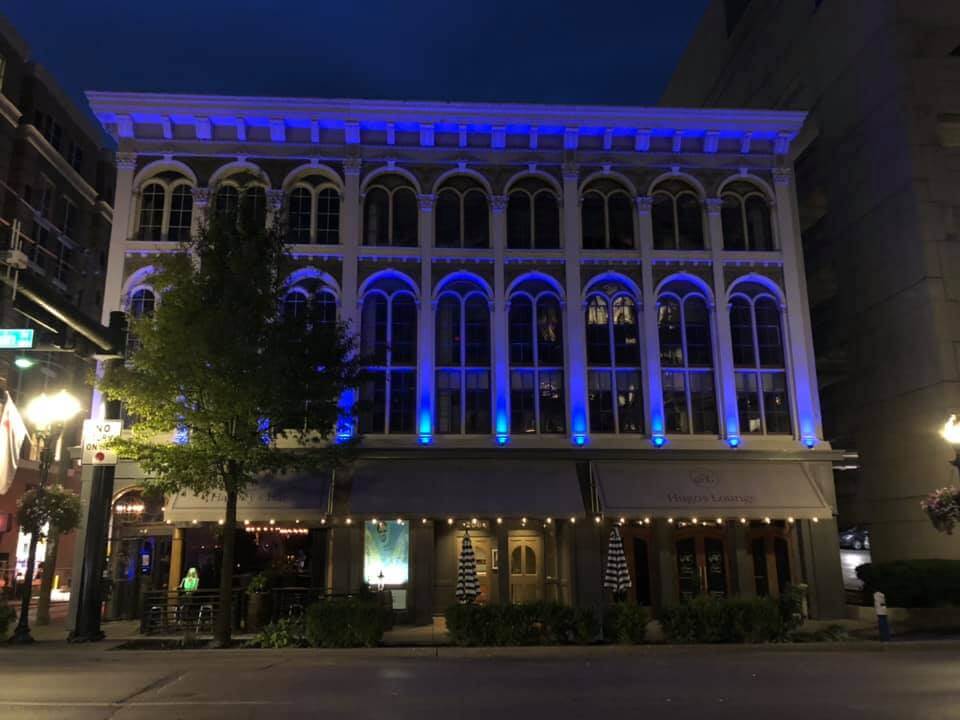 The historic McAdams and Morford Building on West Main Street has gone from dark to beautiful at night, thanks to LexLights!, a recently introduced downtown lighting initiative.

The McAdams and Morford Building received a LexLights! grant of $3,775 to illuminate 11 columns and install festival lighting under existing awnings. The LED lights have color-changing capabilities so that color combinations and patterns can be changed easily for different holidays and seasons. Outdoor Lighting Perspectives designed the lighting improvements. 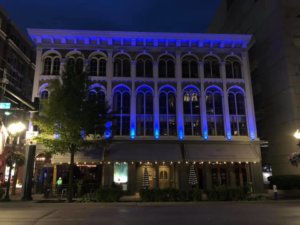 Ross said when he was contacted by LexLights! about lighting the façade, he immediately thought lights could be used to enhance the architectural elements. “That’s what we tried to do, and I think it turned out quite successful… it’s amazing what you can do for very little money considering the dramatic impact of lights,” Ross said. The total cost for the new lights was $7,549.

The McAdams Morford building is on the corner of Main Street and Upper Street and was constructed in 1849. It has been placed on the National Register of Historic Places, in large part due to its cast iron façade, a very rare architectural feature in this area.

McAdams and Morford Drugstore, owned by William Lucas, was a fixture in downtown Lexington for decades. Ross bought the building in 1978 and renovated the second and third floors for his firm, Ross Tarrant Architects. The firm remained there until about 10 years ago when it moved to East Main Street.

Speaking about the building with affection now that it is well-lit, Ross said, “I think she is the most handsome gal on the street. She’s the ‘main’ in Main Street.”

Cities across the country have been pursuing light-related projects. Lights not only add ambiance, but well-lit cities also witness less crime.

LexLights! improves lighting in downtown Lexington through two efforts. The first is to create impactful art and festive lighting projects through public-private partnerships. The second is to offer incentives to property owners to repair, replace, or enhance lighting with support from the DLMD and DLP Property Improvement Grant Program.

These partnerships will lead to improved lighting across downtown, from the lighting of pedways, to storefronts, to public art.

The concept of creating a better lit downtown originated from a public open house at the Hilton in 2018 and a survey of the metro area. Property and business owners, residents, and the general public identified lighting as the top priority for downtown improvements.

LexLights! dovetails nicely with the other lighting projects that have already taken place in Lexington. The historic courthouse is now beautifully lit, and string lights along Short and Mill Streets offer visibility and charm.

For more information on how you can light up your property or business, you may contact Beverly Fortune at (859) 948-7846