Belle Plaine is a singer, a songwriter and an inventive musician who was raised on the Canadian prairies near the hamlet of Fosston, Saskatchewan – population: 45. The ingenuity, lonesome yearning and collaborative work ethic of country life have infiltrated her songwriting, her sound and her methods.

Belle’s reverence for artists who defy categorization has led her to create a brand of roots music that combines vintage blues and swing tones of the 1940s with classic country styles made popular in the heyday of the Grand Ole Opry. Belle’s greatest strength is an unfailing ability to weave stories, genres and emotions with her formidable voice. Twangy early influences from the family AM radio mixed with a dozen years of classical voice training throughout Belle’s upbringing led her into studying contemporary music in college. When Belle started performing full-time, she paired her voice with instinctive songwriting and a tinder-dry wit, and that provided all the fuel required to make hearts smoulder.

With his fifth full-length release, Realms, Blake Berglund exposed the common ground occupied by the Cowboy and the Mystic. However, despite its esoteric nature, a relatability shines through as voiced by average characters with not so average abilities to tell their stories.

Born and raised on the edge of Saskatchewan’s Moose Mountain Provincial Park, Berglund’s childhood responsibilities of tending to two-hundred head of horses with equal amount cattle gave the work ethic and risk management to approach a career from ‘outside of the box’. Whether it be selling over 11,000 albums literally door-to-door or turning away from mainstream fashions dictated by the “country music” industry, he has forged a path unique to itself. 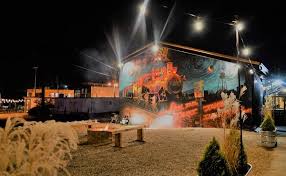