Black Violin spent the latter half of 2018 and beginning of 2019 touring, writing, and recording new music. The Impossible Tour ramped up in January, shortly after wrapping up their successful 2018 Classical Boom Tour which consisted of over 90 concerts and included back to back sold out performances at the Kennedy Center in Washington D.C.. Black Violin is currently writing and recording their next studio album expected to be

released in early 2020. The band recently released their track “Dreamer” and shortly after released an accompanying video. Black Violin’s last record, Stereotypes, debuted at #1 on the Billboard Classical Crossover Chart and #4 on the Billboard R&B Chart.

NPR praised the album and band, saying “their music will keep classical music alive for the next generation.” Black Violin is composed of both classically trained violist Wil Baptiste, and violinist Kev Marcus. The duo, from South Florida, began playing together in their high school orchestra class. After attending separate colleges Kev and Wil reunited and decided to combine their classical training and love for hip-hop music; establishing a distinguished,genre-bending sound that has often been described as “classical boom”. 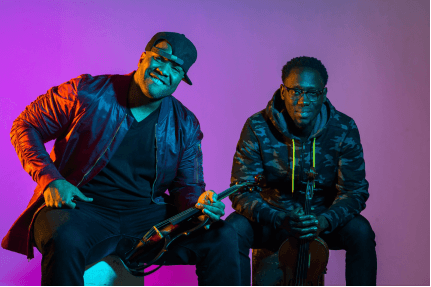